Conveying her versatile truths and the subtle inclusion of her kaleidoscopic identity, South African artist Thenjiwe Niki Nkosi talked to us about her present series ‘Gymnasium’ and much more

While the world finds ways to put us into boxes, creating a neat little space for our identities to fit into, Thenjiwe learnt early enough that those boxes could not contain the amount of influences, information and inspiration that she would gain throughout her creative journey. ‘I may have the identity of a painter now, but it doesn’t describe me well! And I did not want to settle into one mode of working. I wanted to be versed in various media and be proficient using various tools… Your identity is read in one way in one place and another way in another place,’ she said, over a telephonic conversation. 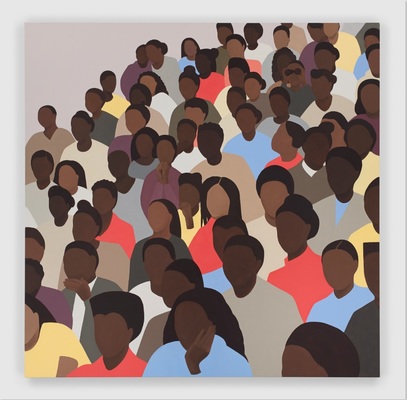 Her ‘Gymnasium’ series of paintings were what caught our attention, but Thenjiwe’s works, much like her own personality, cannot be contained in a singular definition. She works across mediums and ideologies, all of which are inextricably rooted in her own upbringing, her cultural background as well as her travels, each of which have influenced her visual language. She spoke of her ‘otherness’ that made it difficult for her to relate deeply in the beginning. Now, however, it has become the most important part of her life that has helped create an identity that does not have any visible ‘roots’. ‘One thing that is important to me is creating figures that don’t have a specific identity, allowing for some kind of universality. So yes, the figures are all black or brown, but they’re a symbol of every person in some way, stand-ins for anybody. And, in some way, I want to challenge people to accept the universal symbol of a human as a person of colour,’ she says evocatively. 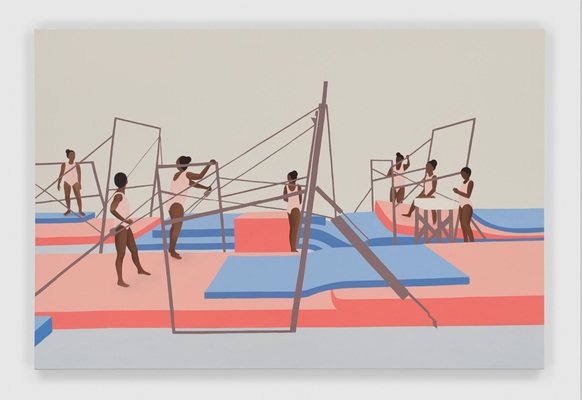 We spoke next about her ‘Architectures’ series, and Thenjiwe remarked that her own history with South Africa is what first drew her attention to it. ‘The architectural work is something that I consider as my entry point into painting and it will always be a subject that I turn to – because it is always, somehow, relevant…I am looking at Apartheid architecture, built around the late 1940s through the 1980s. They really are the perfect metaphor for the fact that nothing has really changed in South Africa. Most of those buildings are either banks or university institutions – they have really problematic histories. The buildings themselves and the institutions that they housed were built on the idea of exclusion and domination…These institutions wanted to portray themselves in a particularly imposing, dominating, authoritarian way – and so the architecture reflects that.’ 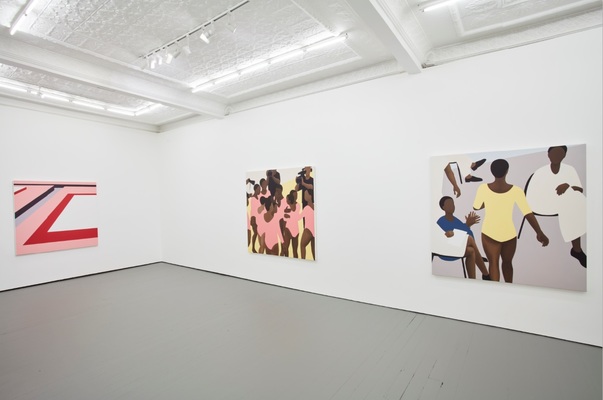 Furthering her message on the above, she also mentioned that in many ways the structures are still very much colonial in nature – prompting an internal reflection and a visually deep response. While the architecture played into the work, so did her featureless human figures that encouraged an activation of the space itself, that contained a certain ‘gaze’. ‘The point is that they are being gazed at all the time; that is the core essential. The work is about the gaze – about being regarded, being judged, being scrutinized – and in other ways being adored and celebrated. It is about the gaze and the performance. In the work ‘Team’ where there are three cameras around a group of young gymnasts who are either celebrating or lamenting and supporting one another, the fourth ‘eye’ is us. And that’s to implicate you, the viewer in the aspect of regarding, perhaps judging, perhaps witnessing, perhaps celebrating.’ 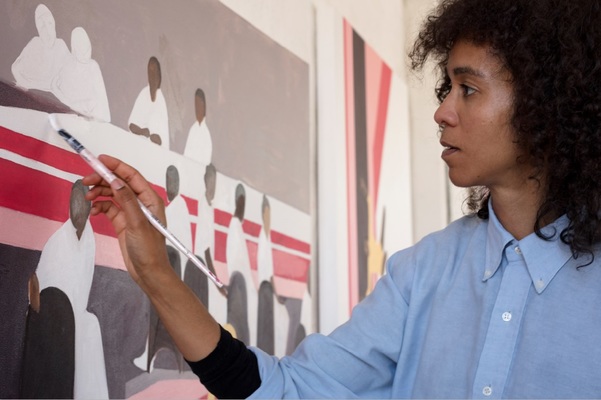 Allowing for some amount of projection from the viewer as well, and leaving them to confront the many gazes, this inception of a concept truly prompts more than just our attentions. Completing the conversation quite beautifully, Thenjiwe said, ‘For me, when writers and artist of colour reach out to me from different places, it’s very moving. Because it really makes me feel understood.’