A Taste Of Love

Assamese film-maker Bhaskar Hazarika talks to us about his film Aamis and why a love story turning to darkness is a world apart from a dark story turning to love. Edited excerpts from the story.

In Bhaskar Hazarika’s world, words are like the women of Shaheenbagh, relentlessly and fearlessly protesting against all that is being propounded as the norm, as something that is ‘good’ and ‘required’. Here, and by that I mean Hazarika’s world, the cinemascope version of his stories are fine examples of what the shape of possibility could be when boundaries are redrawn, when the centre shifts, when the rules no longer apply. Here, and now I mean in both spaces, words ring true because they fill the impossible void of silence, and stir the stagnant muddy waters of repressed thought. Here, ideas shine through because they reiterate the qualities of love, equality and hope.

I watched Hazarika’s Aamis (Assamese for ‘Meat’; 2019) as part of – a dynamic eight-year-old film club in Madras – early this year and the film left me deliciously uncomfortable. The film, on one level, is about a younger man falling in love with an older woman – a regular cinematic romance trope, if you must; but on another level, it explores the idea of sensuality, physicality and intimacy and the volatile textures of desire. It is unafraid of this journey, and unafraid to tread the dark realm of the senses. ‘I do deliberately seek the unusual. There is so much competition that I have to think of something different, a different way of saying and seeing things,’ he says when we speak over the phone. Our conversation is split up over two days, over scratchy Internet connectivity, over an actors’ workshop in Guwahati for the next film he is producing, and over unexpected visits to the hospital to meet an ailing relative. 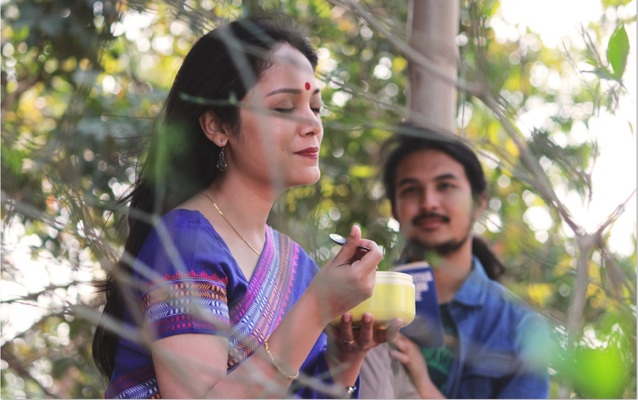 In a promotional video for the film, Anurag Kashyap, Bollywood’s darling and misfit, who also officially presented Aamis when it released last year, says we ‘haven’t seen anything like this coming out of India’. While there is a lot in Kashyap’s cinema I don’t agree with, this I had to. Aamis is surreal, unexpected, and almost tender, like a child unconsciously running her hand over weathered skin. We have seen this kind of romance before, we know its trajectory, and, yet, there is so much we don’t know, so much that bubbles just beneath the surface, till nothing can hold it back, and we are consumed in its deluge of staid wisdom. At the screening, Hazarika said he was excited to watch the film again because he hadn’t seen it in two months. I ask him later what most film-makers say about the fatigue of watching their work too many times. ‘Usually I can’t take it beyond the 25th screening, but Aamis is something else, man. I can see it again today, right now, you know? It’s just a whole way the film was made, the cast, the crew, it was a different experience.’ 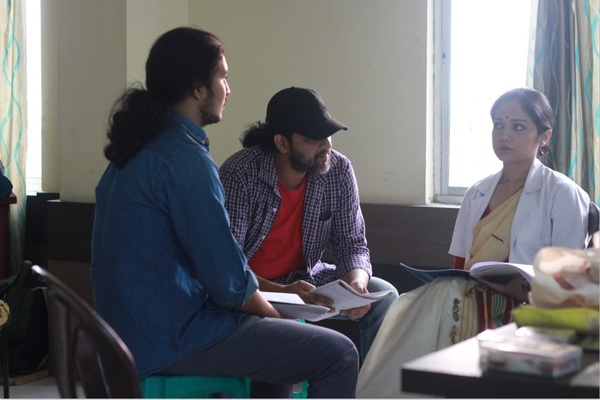 Lima Das, Arghadeep Baruah and Bhaskar Hazarika on the sets of Aamis

At a time when ‘food porn’ is a thing on one end of the privileged spectrum and lynching for food habits at the other end where things quickly turn dystopian to our inundated eyes, Aamis subverts the politics that define how we consume food, to how we perceive ‘flesh’. The rigid boundaries set by society are unassumingly crossed, and, yet, the line is still in sight, making the horror of the unknown delectable and addictive – so that Sumon asking his veterinary doctor friend to cut a piece of his flesh to cook it for Nirmali is as deep and intimate a touch as Sumon and Nirmali, in police custody, their faces covered, holding hands in the end for the first time. The repulsion, so obviously exaggerated in Polanski’s iconic film of the same name – a psychological horror film (incidentally, Aamis too is often described as that) that also works with the dynamic of the ‘body’ and desire – is made completely nondescript in Aamis. ‘Actually, this was this was what we were trying to achieve – the fact that it became real that made the menace stronger. I was very conscious of this. I tried to normalise the horror here, and we used a lot of dramatic music, dialogue and shots to achieve that sense of horror within the everyday,’ said Hazarika.

Praveena Shivram is the Editor of Arts Illustrated. To read the full article, click here.

One For The Road